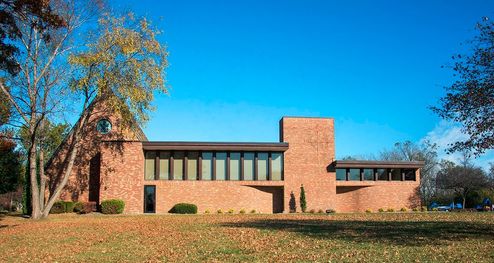 A worship service by the Presbytery of Des Moines was held on Thursday, April 11, 1957 to organize Covenant Church with 75 persons as charter members. The Organizing Pastor, the Reverend Ted Madsen, was issued a call becoming the first pastor. Soon, the membership outgrew the pastor’s house (where the congregation was gathering) and arrangements were made to hold worship services and education classes at Fairmeadows Elementary School in West Des Moines.
​
The Reverend Dean Waychoff was called to Covenant Church in 1960. In 1961, groundbreaking ceremonies were held by the congregation at the northeast corner of 28th and Ashworth Road in West Des Moines, where Covenant is today. Members contributed time and talents in completing much of the interior work, while the ministry and mission of the church continued to grow.

In 1964, the east wing of the building was added for more space. The same year, the Reverend J. Whitfield Sloan came to serve Covenant. By 1967, when the Reverend Alfred Drake arrived, Covenant had over 350 members. The Reverend John Folkers served in 1970. In 1972, the Reverend Jack Peters answered the call of service to the growing congregation.

From 1978 to 1980, the Reverend Don Elly served the church and he was followed by Interim Pastor, the Reverend Ward Conklin. The Reverend John Severson was called to the church in June, 1981. In August of that year, the Session proposed to the congregation a special capital fund drive for additions to the building. These would include a sanctuary, fellowship hall, kitchen, classrooms and bathrooms. The congregation approved the proposal. Groundbreaking ceremonies were held in the summer of 1982. The new and expanded facility was dedicated in April of 1983. Two more building expansions were completed in the late 1980’s and the early 1990’s. These expansions included the west classroom wing and the north office and classroom areas. The church’s most recent addition was in 2000 to expand the chancel area of the sanctuary, crowning it with the distinctive “arrow window.”

In 1997, the Reverend Bernie Sayler was added as a part-time Associate Pastor for calling and pastoral care ministries. He joined a long list of dedicated staff and volunteers supporting the members, friends, and visitors of Covenant Church in its ministry efforts.

Throughout the years, use of the facility has been important to the congregation. A Montessori school was housed in the building for some years. Starting in 2006, Drake University established Head Start classes enabling at-risk children to receive early education in a safe and beautiful building.

The Reverend John Severson retired from Covenant in 2001 and the Reverend Dr. Richard Harbart was called as Interim Pastor. The Marshall memorial stained glass windows found in the chancel area of the sanctuary were installed by Easter of 2002.

The Reverend John Gallatine was called by the congregation in 2003. The position of Director of Christian Education was established at that same time, a position which has been in place ever since. In June 2006, the Reverend David Schneider was called as Interim Pastor, remaining in that position until January 2008. In February 2008, the Reverend Jan Scott was extended the call by the congregation and served in active ministry until retirement in June of 2017. Our current minister, Reverend Nathan Williams accepted his call to Covenant in September of 2017.

Covenant has a long and remarkable 60-year history of deep commitment to mission work locally, nationally and internationally. For the past few years, it has partnered with St. Timothy’s Episcopal Church in the Faith & Grace Garden, formed lasting partnerships with the San Isidro canton in El Salvador and established a strong working strategy in its support of Drake University’s Head Start program housed in the east wing of the building. Covenant participates with and supports a host of local work such as Meals from the Heartland, COG and Church World Service’s Hunger Hike. Its Coins for Concern reaches to Orchard Place, YESS, Cross Ministries Back Pack Drive, Iowa Baseball Camp for the Deaf, DMARC Emergency Food Pantry, Lutheran Services of Iowa (Refugee ministry), Dorothy’s House (combating and providing recovery from human trafficking) and the East Des Moines Family Clinic, to name a few.

Covenant’s commitment to the educational growth and faith development of its children, youth, adults, friends and visitors has been evident by having the position of Christian Education Director since 2003, a position held by various highly qualified leaders​. Adult education is offered through various instructional classes, youth receive a holistic approach in their faith maturity and children experience a healthy mix of Bible formation and communal engagement augmented with play and fun.

Covenant uses music in its various forms as another means of proclamation of the grace of its Lord. Staffed with gifted and talented artisans, faith is proclaimed through organ, piano, Chancel Choir, Crescendo Bell Choir and Covenant Children’s Choir and Children’s Bell Choir. The investment of a new audio visual system in 2010 provides additional ways of supporting Covenant’s traditional worship experience with modern attentions. The adoption of the new Glory to God hymnal has expanded the selection of both well-loved hymns as well as introduced the congregation to new hymns with modern expressions of proclamation.

Covenant’s Board of Shepherds functions as support for pastoral care in the congregation, helping the members, friends and visitors of the church in knowing they are cared for and treasured. While not replacing the important ministry of a pastor’s care toward the congregation, the Board of Shepherds provides the link of keeping people connected and supported in whatever event may be happening to them.

Recently, Covenant’s fifteen-member Session was reconfigured into a six-member Session in order to apply a more council model of discernment in leading the congregation. It retains the importance of youth elders in this new model.

Because of the commitment and joyful participation of its Session committees in the areas of fellowship, personnel, Christian education, stewardship, mission, property, worship & music and its small group ministries which draw the community of faith together in reflection, service and friendship, Covenant celebrates the efforts of many, many people throughout the years making its ministry successful and fulfilling for its mission of “serving as Christ’s disciples by lifting one another through loving and caring relationships for the glory of God.”

Through the commitment and devotion of pastors, staff, elders, lay leaders, members and friends, Covenant celebrates its 60th year of ministry. With the blessings of God in service to Christ the Lord, Covenant Presbyterian Church looks forward to many years ahead by Embracing Tomorrow Today.

We Would Love to Have You Visit Soon!
​